Lhasa Apsos are smart, lively, friendly and confident dogs. The Lhasa is a very good pet and makes a wonderful companion. This small breed is very affectionate towards their owners, and when provided with the right training, is a very obedient dog.

The Lhasa Apso has exceptional hearing, enjoys barking, and does not like to be left alone. This is a dog that has serious personality and isn’t afraid to show others exactly what he/she thinks or feels based on human actions and behaviors towards the dog.

Lhasa Apsos are a long-lived breed and are an ideal choice for a single owner, families without children, or families with older children who treat the dog with respect.

Lhasa Apsos were originally bred in Tibet, and have existed since 800 B.C. They are recognized as being one of the 14 most ancient breeds of dog in existence today.

The name of the Lhasa Apso breed is taken from the most sacred Tibetan city, its capital, Lhasa. For 2,000 years or more, Lhasas were only bred and found in Tibet. They were bred by holy men and Tibetan nobles.

Lhasas were known in Tibet as “Abso Seng Kye”, which roughly translates to Bark Lion Sentinel Dog. This was a fitting name, as the Lhasa was initially bred as watchdogs for monasteries and temples. They were considered very sacred dogs. This is because the Tibetans believed that when the master of a Lhasa Apso died, his soul would enter the Lhasa’s body.

It was also believed that those who owned Lhasa Apsos were blessed with good fortune, as he/she brought peace and prosperity to the household. This made the dog very popular and nearly impossible to buy because they were so hard to find. Furthermore, not only were they hard to find because of their popularity, but Tibet’s ruler, the Dalai Lama, would give them as gifts to foreign diplomats that visited the Tibetan nation.

The Lhasa Apso didn’t come to Britain until the early 1900’s, and were not present in America until the 1930’s. The Lhasa Apso was recognized by the American Kennel Club in 1935. Today, they continue to be a popular dog breed around the world.

Lhasa Apsos – Plenty of Dog in a Small Package

Lhasa Apsos are small dogs that are part of the herding and non-sporting dog groups. They stand 10-11 inches at the shoulder, and weigh between 13-15 pounds, with females being on the smaller side.

They are a highly sociable and intelligent breed and make excellent watchdogs. They will happily bark to alert their owner to strangers. That being said, aside from using their bark as a watchdog tool, they also enjoy barking on a regular basis, which may become quite bothersome if not properly controlled.

Although Lhasa Apsos are sociable and friendly, they can be nervous around strangers and children. They will tolerate respectful children but will not tolerate teasing. A Lhasa will not hesitate to snap at or bite a child who is displaying mean and cruel behaviors. Furthermore, due to the fact that these dogs are small, it is easy for them to become injured, which also doesn’t make them ideal pets for children.

In addition to children, Lhasa Apsos are not really tolerant of other family pets including dogs. The Lhasa will be tempted to fight other dogs, and isn’t interested in sharing their owner with other canines.

The Lhasa is an extremely intelligent and obedient dog when properly trained. However, they can be willful at times, and may be stubborn to train if not provided with firm and gentle teaching.

Due to his/her size, Lhasa Apsos do well in apartments and are quite active indoors. They will be fine in a home without a yard, but should still be sufficiently exercised outside and taken on daily walks (walked twice a day for 15 minutes). Also, don’t forget that Lhasas love to play and run free whenever given the chance, and are generally much happier when provided this exercise regularly.

The Lhasa Apso lives an average of 15+ years, and is a relatively healthy breed. Some health problems that this breed may encounter include skin problems, eye problems, bleeding ulcers, kidney problems, and occasionally, hip dysplasia.

The Lhasa is an ideal dog for allergy sufferers. Lhasas do not shed, but they do require plenty of grooming. Their coat requires daily brushing to prevent mats, as well as an occasional trim or full clipping depending on the preferred length of coat. Most owners tend to keep the coat clipped short for easier grooming, but if left to grow, a Lhasas coat will reach the floor.

The Lhasa is a minimal shedder, and may not shed at all for those who take care to groom his/her coat daily. However, it is not uncommon for the Lhasa to shed his/her undercoat twice per year. Therefore, this dog breed may not be the best choice for those who suffer from dog allergies.

Lhasa Apsos are a brilliant and beautiful breed. Their devoted and loving nature has helped them stand the test of time and remain close to the hearts of dog lovers everywhere. 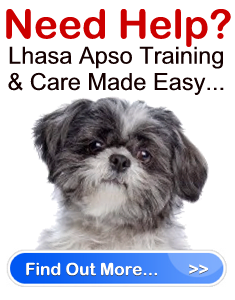